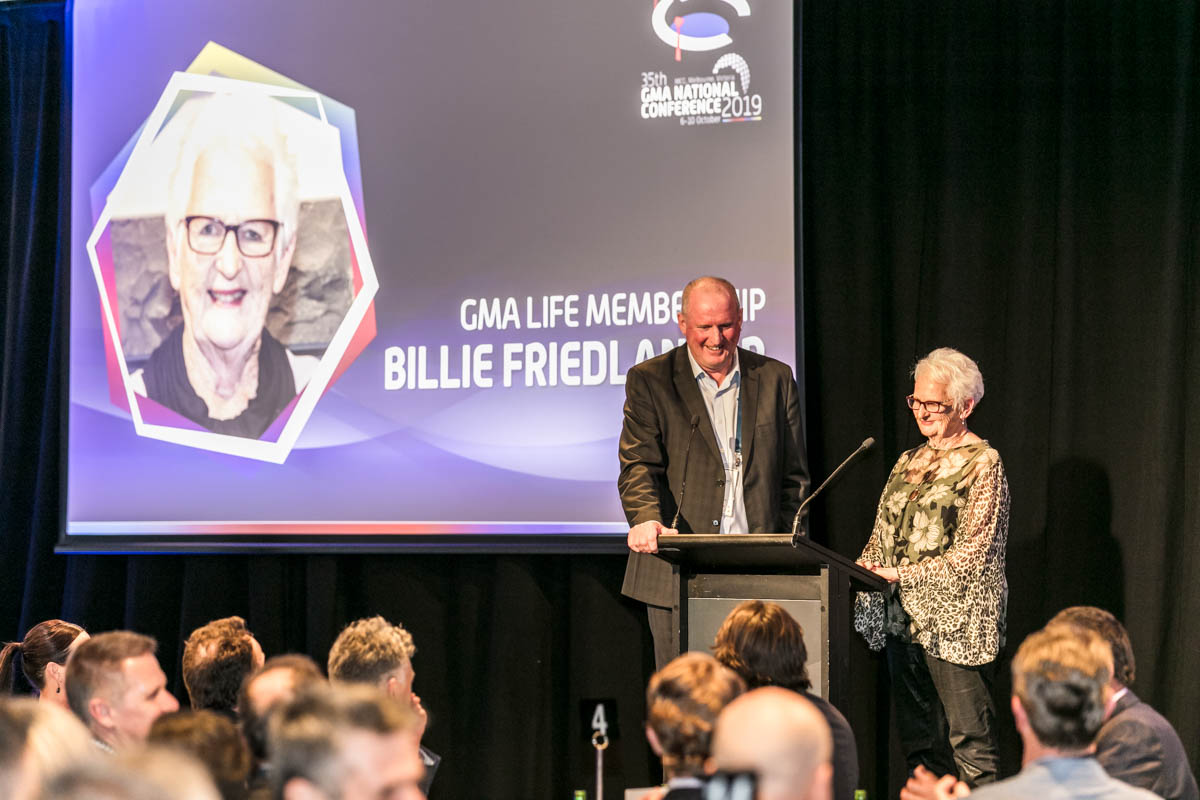 Golf Management Australia recently bestowed a Life Membership on Billie Friedlander, acknowledging her outstanding career and commitment to the game of golf and club management in Australia.

Billie was in attendance at the 2019 GMA National Conference and was humbled to be able to accept the honor.  Her Life Membership nomination was put forward by the WA Executive Committee and wholly supported by the national GMA Board.

Billie is still an active Member of GMAWA and regularly attends Business Meetings and Conferences.  Her contributions to golf and golf management within Australia are significant and make her a worthy recipient of Life Membership of GMA.  Billie has spent over 40 years in the industry and during that time has guided, mentored and supported many golf club managers.

Billie was the Managing Secretary at Mandurah Country Club for 22 years and during that time also served as the honorary secretary for GMAWA.  On two separate occasions, she performed the role of honorary secretary of GMA National (formerly known as the Golf Club Secretaries & Managers Association of Australia & New Zealand) and upon retirement from the Mandurah Country Club, took on the role of Executive Officer of GMAWA.

The presentation of Life Membership was made by former GMA Chair, Andrew Gay, during the Schweppes National Conference Dinner at the 2019 conference.  Billie received a standing ovation during the presentation and was noticeably overwhelmed with gratitude.

The following Q & A took place on stage:

Andrew Gay: What made you get into golf club management, particularly during that era when things were very different?

Billie Friedlander: Andrew, back in that era, golf club management came to me.  I was working at the Mandurah Country Club in the office with General Manager Ian Platt.  After 6 months of being there, Ian, who was a very good manager went to work at Royal Fremantle.  The Club then went on to employ another 2 managers who were both sacked within 3 months.  The committee asked me to “hold the fort” and I retired from holding that fort in 1996.  It wouldn’t have been the right thing to do, to appoint a woman in those days.

AG: You attended your first conference in 1983 and you’ve attended most since then, seeing the conference now with some 300 attendees, what are the main changes you’ve seen since the conferences in the 80s to now?

BF: I was invited to the conference in '83 because that was the year of equal opportunity.  There were about 100 managers, and, in those days, conferences were held at golf clubs and not at convention centres like this.  It was far more personal, and you had more contact with other managers. We had educational sessions suited to the management style of the day, but we also mixed more freely and had a lot of sessions together.  At the end of the conference, I was able to write a great report with various ideas to take back to my own club.  And I always had someone in Australia to turn to if there was a problem.

AG: That’s still the case now and people still network now and meet other managers.  So that theme has carried on which has been fantastic.

BF: I must admit, I was very nervous at that first conference and I was watching my Ps and Qs very closely.  The managers were running scared because of equal opportunity and about what would happen when women were admitted and were eligible to stand on committees.  They thought they were going to take it over.  And I was just sitting there quietly listening but, in the end, it was too much and I had to say something.  You could have heard a pin drop because not only did they have a woman at the conference, but she was going to open her mouth!  I came from Mandurah Country Club where our ladies were full members from the beginning, so I could speak with authority, but I was very scared!